Weekly Coffee Drop-in, every Monday! Next event is November 1st at 12:30 p.m., gather with your fellow engineers online to have a casual chat! Register here.

Data Science Workshop 2 on November 18 at 7 to 8:30 p.m. The McMaster GSA proudly presents our 6-part Data Science workshop series hosted by Larry Simon. Through these workshops, participants will learn about Python, data visualization, databases, statistics for data science, and machine learning. Participants who attend 5 out of the 6 workshops between now and March 2021 will receive a non-accredited certificate of completion. Event registration here.

Insight Fellows Program Applications due for Winter 2021: We’re now accepting applications from graduating students (must complete all coursework by January 19th in order to participate full time) for our winter sessions. Insight Fellowship is a seven-week professional training fellowship for graduating students and working professionals looking to transition to thriving careers as data scientists, engineers, and other cutting-edge professionals. Apply here to the fully-remote winter session by November 2. Questions can be emailed here.

EGS Fall 2020: Technical Workshop 2: Intro to R on November 12 at 1 to 3 p.m. (Facilitator: Vivek Jadon)
Attendees will learn the basics of each programming language. This includes (but not limited to) setting up a dedicated environment, applications of loops, “if else” statements, creating functions, as well as performing matrix and mathematical operations. Registration link here. The QR code in the poster will take you to the same link. Any questions should be forwarded to the Engineering Graduate Society (EGS).

Do you know someone who deserves recognition within the graduate student community between May 2019 to 2020? Nominations are due November 23rd, 2020. More details and forms can be found here. 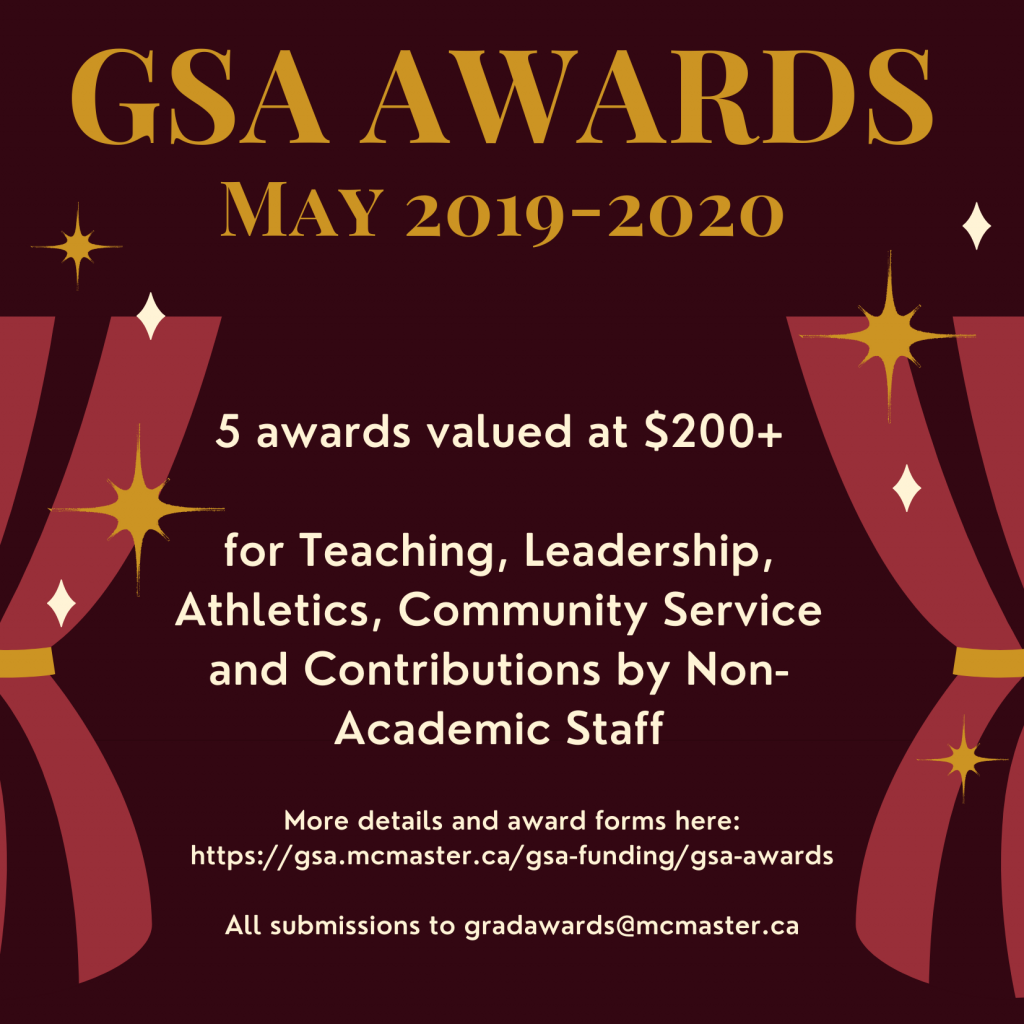 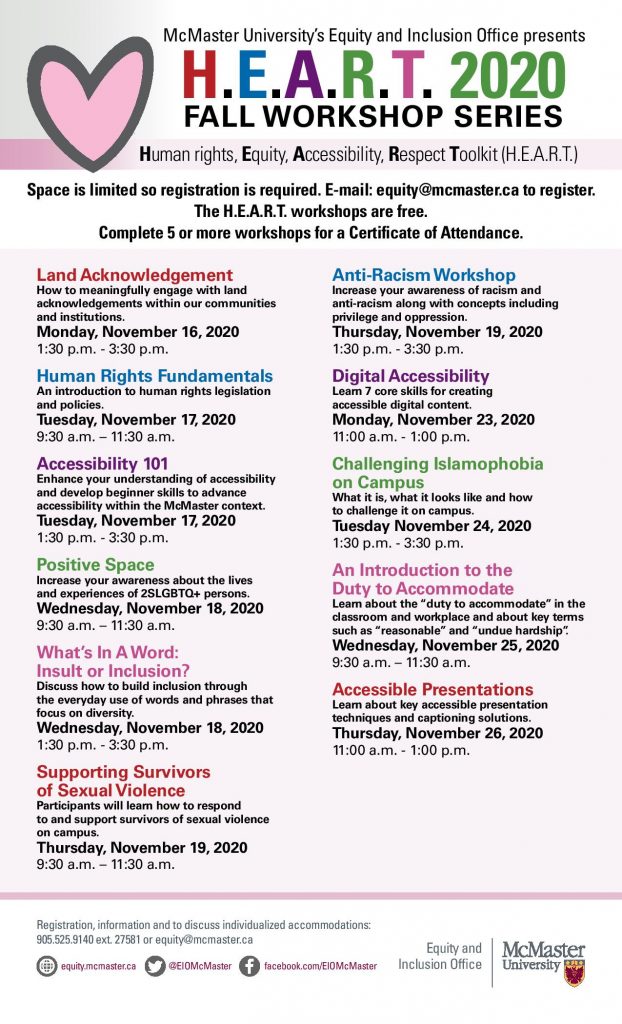 Hello everyone! My name is Tiffany and I am one of the FRC representatives for the faculty of science (along with Pritpal who you met last week). I act as a liaison between the GSA and the Faculty of Science ensuring clear communication between the two groups. Academically, I am a PhD candidate in the Department of Kinesiology where I research molecular biology of skeletal muscle. Personally, I recently got a labradoodle named Beaker (muppet/science pun intended) who is helping me stay active while working from home. Please feel free to reach out to me with any questions or concerns pertaining to the GSA or SciGSA via email (vanlit@mcmaster.ca).

Thank you, Tiffany, for being our ninth feature on this Introduction Series. We have a number of amazing GSA Clubs and Faculty Representatives of the Council that you can connect with! Check the full list on our website.

At Council meeting this month, we welcomed two new representatives for Social Sciences, Rida and Sarah! We look forward to all the new fresh ideas for events they are planning for students in the Faculty of Social Science.

‘Free’ Flu vaccines are being offered to our students, on Campus at the Student Wellness Centre! Only one more date left (Nov 5th), more details here.

The McMaster University Black student-athlete review was concluded recently, with a report generated here. The experiences of these students are appalling and we commend them for speaking about their experience. We encourage you to read the report and the recommendations for change across the university.

What do you think about Graduate Student Space on Campus? The GSA Student Issues Action Committee is interested in your experience. Please fill out this short 2 minute survey if you are interested in using this space. The survey will be open for another week! 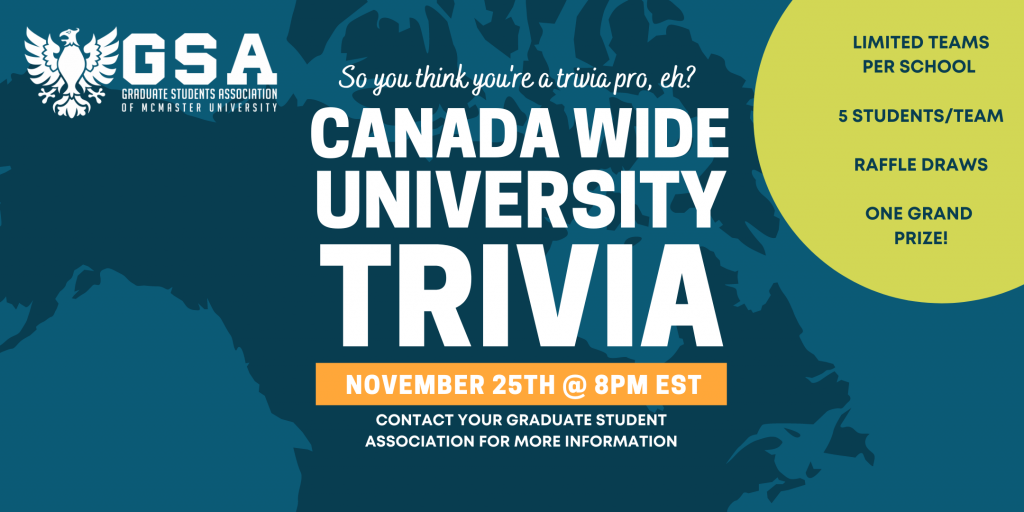 All work and no play can make online time feel heavy and endless! The GSA is hoping to provide you with some creative social activities throughout the Winter season. You are officially invited to the inaugural Canada-Wide University Trivia on November 25th. Interested in learning more? Click the following sign-up form link, which includes details about the event and prizes.

The McMaster Political Science Graduate Students’ Association has issued a statement condemning McMaster University’s decision to deny out-of-province TAs union membership, in the midst of a pandemic, urging the administration to sign the Letter of Understanding (LOU) proposed by CUPE 3906.

The McMaster University Political Science Graduate Students’ Association (MPSGSA) unequivocally condemns the University’s decision to expel out-of-province Teaching Assistants (TAs) from the bargaining unit, in the midst of a pandemic. We call on the administration to immediately reverse this unjust, cruel, and damaging action, and to sign the Letter of Understanding (LOU), proposed by CUPE 3906, to reinstate all TAs’ union rights.

McMaster University responsibly cancelled classes in March, due to the global outbreak of COVID-19. Hence, TAs have been mandated to work from home. Furthermore, many TAs have been barred from crossing the Canadian border and/or entering the province, due to travel restrictions, health concerns, and other factors. Rather than compassionately supporting remote workers – during this most difficult and volatile time – the University has nullified their basic union rights to wage protections, protections against unjust termination, protections against harassment and discrimination, and more. As highlighted by CUPE 3906, the administration is not justified, legally or otherwise, to take this callous step.

To build a brighter world, McMaster must make use of its vast resources to further support its workers, instead of engaging in union busting, negatively harming us all as workers. We have already been struggling with wages below the poverty line before the pandemic. The University reputation as a leading academic institution that safeguards the interests of its workers and students is at stake. We expect the administration to make the right decision and sign the proposed LOU to extend the membership of TAs working outside of Ontario for the mandated duration of remote work.